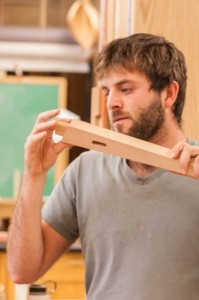 Max returns to the program after being involved in three juried exhibitions over the summer.  This fall his work can be seen at both The Wharton Eshrick Museum, in Philadelphia. As well at The San Luis Obispo Museum of Art.  He looks forward to this year and him up coming projects including some in the world of seating.

Prior to the program he had gained a BA with honors in Comparative design studies from Pitzer College. While intellectually stimulated by design, the “hands on” approach has consumed Max’s life. Beginning as a studio potter, Max found himself working though a variety of media. His projects have included work in farming, bicycle mechanics and, of course, wood.  Born in West Virginia and raised in the Chicago area, he hopes to take what he learns from the Program and apply it to his personal practice, as well as in a furniture business he hopes to start as a student emeritus.