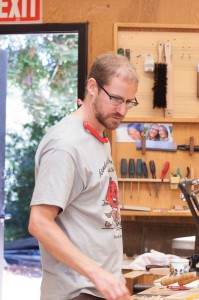 Andy spent the past ten years – minus a year off doing volunteer work in Morocco and Mauritania – working in journalism in Canada, first at community newspapers as a reporter, then at CTV News as a producer and Web journalist. He’s been a hobbyist woodworker for years, and hopes to spend this year learning how to take that passion to the next level. In his spare time he does real sports, such as rock climbing, mountaineering and triathlon, and fake sports, such as ultimate frisbee and disc golf. He also hopes to do some surfing off the Mendocino coast. He plans to spend time this year with Great Whites, but only the Lost Coast Brewery kind.