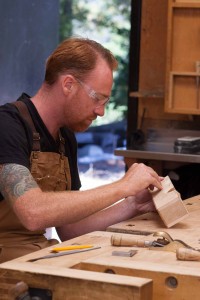 Raised on the south shore of Lake Tahoe, Peter eventually moved to Los Angeles and pursued a career in the entertainment industry.  He has worked as a camera operator, video engineer, or video director on numerous world concert tours, live events, and various broadcast television shows.  As a self educated woodworker, he hopes to refine his craft and abilities during his attendance at the College of the Redwoods.  “Nothing provides catharsis like woodworking… except maybe skiing… I am grateful to be learning from the best.”