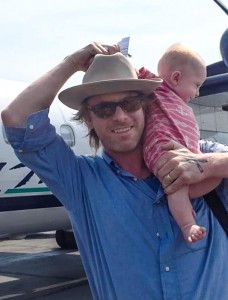 Born and raised in Seattle, Washington, Walker took to woodworking quite early in life.  As a result of stealing his father’s pocketknife when Walker was 5 years old, he began whittling age inappropriate objects (such as sling shots and prison-style shivs) from the driftwood he collected while loitering beside the train tracks which run along the shores of Puget Sound.  During sophomore year, he further developed his skills when his high school administrators relegated him to a remedial track, which, as chance would have it, exposed Walker to a proper wood shop and a kind teacher familiar with marine carpentry.  He made a cedar strip canoe, lapstrake dinghies and a sea kayak out of Mahogany.  Over the next 20 years, or so, Walker periodically revisited the craft:  managing a wood shop for an interior architecture firm, doing whatever piecemeal work which came his way, and, ultimately making furniture in downtown Los Angeles, alone, much like those solitary days he sat by train tracks making weapons.  Also during those two decades, he gained a masters degree in documentary film, spent 10 years as executive at a New York-based independent movie studio and fished for trout in Idaho, whenever the opportunity arose.  He now and forever etches his intention to remain a woodworker – and solely a woodworker – fulfilling an 18-year desire to attend CRFW and solidify his track once and for all.  Along with his wife, Devon, and his son, Reasons, he currently resides in a shack-type structure in Albion, California.